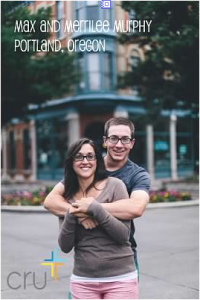 Max and I (Merrilee) met at Montana State University in 2010 through the Cru movement on campus.  We were married in December of 2011 and, after finishing school, joined staff with Cru the summer of 2013.  We are currently in Portland, OR serving on multiple campuses there.  Max graduated with a degree in Exercise Science and I with a degree in Elementary Education.

Max grew up in Montana and attended high school in Power, MT.  Being a small town, his life was about sports, school, and reputation.  In February of 2008, his senior year of high school, Max was drinking alcohol with some friends and driving (naturally).  They were caught and Max was given an MIP (minor in possession of alcohol), and was stripped of everything he had found his identity in: his honors in school and sports, and his reputation.  He began to wander through life, and entered college in the fall feeling purposeless.  In October of 2008, two guys involved with Cru came and knocked on Max’s door and shared the Gospel with him and, for the first time, Max truly understood what God had done for him.  He accepted Christ that day and his life began to change in radical ways.  Max spent the rest of his college career living in the freshmen dorms so that he could tell others about the Good News that had been told to him.  After he graduated in 2012, he interned with Cru for a year while Merrilee finished her student teaching.  They both joined staff together in the summer of 2013.

I also grew up in Montana, but on the other side of the state in Bloomfield, a small farming community just north of Glendive.  I am the lone sister to her three brothers: Marshall, Winston, and Sterling.  I attended Lustre Christian High School and then spent my first 3 semesters at BIOLA University in La Mirada, CA.  Half way through my sophomore year, I transferred to Montana State University in Bozeman, MT.  A friend from high school invited me to a weekly Cru meeting, and I began to get plugged in.  I began to receive training with Cru that helped me share my faith, lead a Bible study, and even read the Bible in a way that was more personal and applicable.  As I grew in my faith, I saw God start to use me to change the lives of those around me and influence others for Christ.  I also moved into the freshmen dorms to tell students about Christ and that is where I met Max. 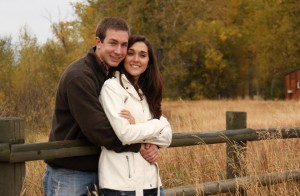 Our most recent addition to the family came in December 2015.  Braxton Lloyd-Robert has been one of our greatest joys.  He has already become a world traveler and always keeps us on our toes!  We are enjoying parenthood thoroughly.  Isn’t he adorable?