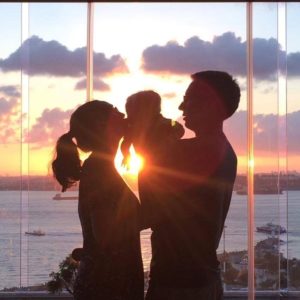 Max, Braxton, and I had the privilege of traveling overseas to a country in the Middle East for 6 weeks in June and July.  We started out the trip with over 10 poopy diapers in 2 days (most of them on the plane) and then a crying baby who just couldn’t sleep on our last 10 hour flight.  To say we were all exhausted when we arrived is an understatement.  The adjustment was rough, particularly on Braxton who never really adjusted to his new sleeping arrangement.  Every two hours, night and day, he would wake up crying and exhausted.  Between being in a new environment, extreme heat, and the call to prayer going off every couple of hours, it’s understandable that his little 5 month old body was struggling!

While that aspect of the trip definitely dominated much of my time and energy, I’m still so glad that we went.  Max was able to go to campus almost every day and met some amazing local students, as well as discipling the students that we brought with us.  A normal day was filled with lots of walking, sweating, and talking.  When we (I was able to go to campus once a week as well while Max watched Braxton) went on campus, we would pair up and approach local students and ask to get to know them and their culture.  We learned SO MUCH about the culture (life revolves around family), the language, and especially Islam.

We also took the students on some cultural experiences, including visiting Mosques and hamams (a sort of steam bath sauna).   Due to the political climate, we were unable to do large group activities and visit the usual “touristy” places, but we did go on a boat trip and spent a weekend on a nearby island which were amazing and fun experiences!

The most amazing part of our summer was hearing about a local student that we had met who became a Christian.  He was so excited about the hope that Jesus offers and, after just a few short weeks of knowing our team, he made the decision to put his faith and hope in Christ!  We were able to connect him with staff who live there long-term and were able to continue discipling him after we left.

The summer was challenging in so many ways, but God drew our family closer to Him and closer to each other through it.  I’m amazed at how much Braxton has grown since then and his ability to adapt! We hope to make it overseas again very soon.